In 2006 , the European Commission published a special Eurobarometer of languages ​​dedicated to the different European countries . In that way we can be aware , among other things, of the differences in learning English , the lingua franca in all kinds of international trade (at least until the Chinese take their place, perhaps in 2050 ) .

In the chart below we collected data for the EU15,  from the oldest and more developed countries of the European Union , with the exception , of course, of the UK and Ireland .

Where would you say Spain is ? 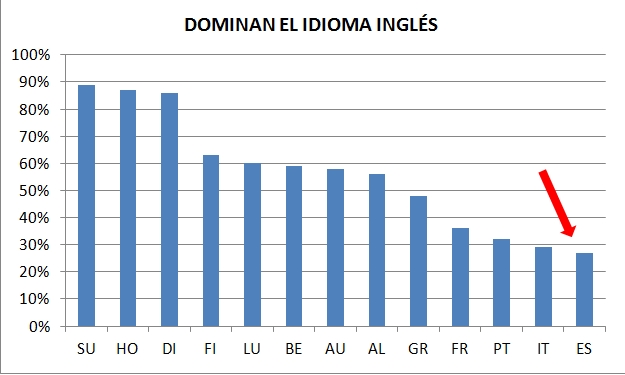 The major structural problem of the Spanish economy is its chronic trade deficit. An economy like ours, which every year sees his debt with the outside increases, it is impractical. This one of the few certainties we have in economics.

Therefore less need to buy abroad and sell more in other countries. We need to rapidly increase our exports, and although some may find it for pilgrims, we believe that part of our lives these purposes relative disadvantage in our poor results in the domain of other languages.

The inability to communicate in a common language, either at a fair in Munich or responding to an email.

If you want to access the global market, if we sell more; if we have the best and broadest knowledge; if we want to attract more tourists and better world; Therefore, we need to speak English as spoken Swedish and Dutch. And to achieve this goal better in 2015 than in 2016

Do not Wait! If you are interested, please get in touch with us!